Types of RF Signal Slip Ring And Their Application

Radio frequency equipment is used in many fields. It radiates electromagnetic waves to realize the functions of communication, detection and even medical treatment. For example, 5G base station is specially used for communication, while radar is used to detect targets. In the process of transmitting and receiving signals from radio frequency equipment, the radio frequency signal slip ring or its combined products are needed to realize the unlimited rotating transmission of current and signal. As a domestic veteran private slip ring manufacturer, Shenzhen JINPAT Electronics has developed several types of radio frequency signal slip rings.

First, let's take a quick look at the single channel LPCC series slip ring,which is only one channel. When it uses 50 Ω coaxial line, it can also transmit radio signals of specific frequency. It can be applied solely or it works with JINPAT cap slip ring LPC-T series cooperatively. It is able to transmit RF signal because of its internal friction pair structure, which is the same as that of LPHF series high-frequency rotary joint. Therefore it can be regarded as an high-frequency slip ring without all accessories such as shell.

JINPAT LPHF high frequency slip ring has more models than LPCC series, which is up to 4 channels. Different models support different RF frequency bands. However, the slip ring of this series is slightly different from LPCC Series that the coaxial line is no longer reserved at both ends of the slip ring. Second, SMA and other interfaces are used, which makes the end users could match the corresponding coaxial line wire. When in use, this kind of slip ring is the same as LPCC series, while its matching integrated objects are not only hollow shaft slip ring, but also disc slip ring. 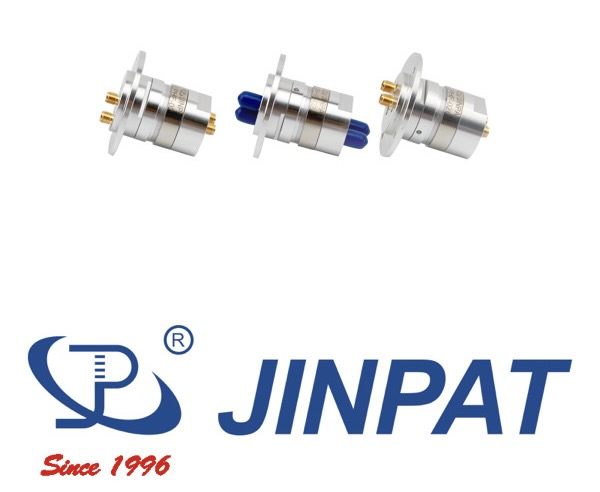 Due to the particularity of RF slip ring, the application range of its integrated products is very narrow. It is basically the radar antenna or mobile communication antenna of various platforms. Of course, this RF integrated slip ring can also be used on some radio and television broadcasting vehicles. From the perspective of RF signal slip rings sold by JINPAT Electronics, they are basically integrated products, and among these products, they are mainly integrated exclusive LPHF RF signal rotary joints.