What kinds of slip rings fit in a bomb disposal robot

Bomb disposal is one of the most difficult task for human beings, which might breed many dangers. So bomb disposal robots are developed to assist human in such task. In fact, bomb disposal robot is actually a kind of unmanned vehicle that still need human to operate outside of the field. A bomb disposal robot is usually loaded with a high definition camera that helps to detect the environment. Such device should be allowed to rotate in 360-degree so as to provide a full-round view of the surroundings. And most importantly, the robot arm is the key to conduct the actual dismantling of a bomb. To enable a flexible and accurate movement of the robot arm, a slip ring is needed.

JINPAT optoelectronic slip ring is a good choice to connect the high definition camera with the robot body. JINPAT LPT000-6402-E3-FO01 is able to transmit power and optical signals. So it is able to transmit angle signal to control the movement of the camera head while transmitting the high definition video signals back to the processor. It consists of two mules, namely the electrical module and the optical module. For the former unit, there are 64 2A power channels and 1 Gigabit Ethernet channel. As for the latter, it adopts a single mode optical rotary joint with 1 channel. With the assistance of this optoelectronic slip ring, the bomb disposal robot can capture a vivid and all-round view of the site. 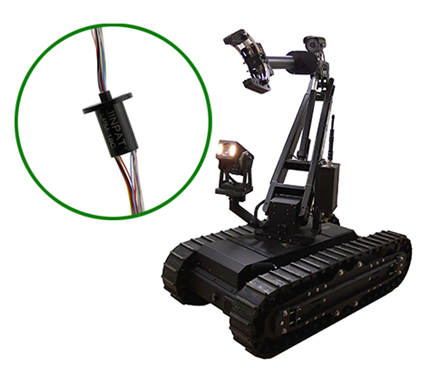 Aside from the slip ring mentioned above, JINPAT has many other slip ring type. As for military application, JINPAT also has high standard and precision slip ring solutions. Contact us to learn more.