Among all the slip ring series produced by JINPAT Electronics, separate slip ring LPS series does not get much attention as the others. Without any housing protection, the slip ring rotor and the copper ring are exposed and can only be used in indoor environment with fixed temperature and humidity. The limitation of its application environment makes it less favored in the market place. 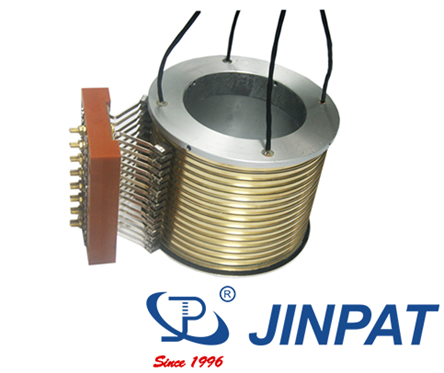 LPS116-16S is a representative customized separate slip ring. This is a signal slip ring which adopts silver graphite carbon brush instead of traditional gold-plated brush on the stator side. Compared to copper graphite brush, the price of silver graphite is much higher. The latter’s outperformed the former kind in terms of conductivity. The rotating speed of LPS116-16S reaches up to 2000rpm. There are 16 channels for pulse signals. The working voltage is 380VAC while that of the other slip rings for weak electrical signal is only 24V.

Aside from separate slip rings, JINPAT also has mature production lines in capsule slip rings, through-bore slip rings, miniature slip rings and so on. There are thousands of standard slip ring models you can choose from. Our technical team also provides customized slip ring design. Contact us for more information!